Known as the Whale Watching Capital of the Caribbean, Dominica boasts a 90% success rate in spotting whales and dolphins during a whale watching excursion. The peak season is between November and June, but with the added bonus of resident pods of sperm whales and other species here in Dominica, you stand a good chance of seeing whales and dolphins year round.

Whales and dolphins are plentiful in our crystal blue waters and various species can be seen frolicking along Dominica’s coastline throughout the year. The most commonly sighted species can be found year-round in the waters off Dominica, including:

What makes Dominica truly unique is the opportunity to observe the largest of all the toothed whales, and star of Herman Melville’s Moby Dick, the sperm whale.

Stunning aerial footage of Whales and Dolphins off the coast of Dominica. Taken by ROTORPIXEL 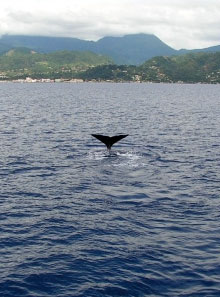 Sperm Whales Speak in Code to Show Their Identity

Sperm Whales Have Names for Each Other

The Encyclopedia of Earth – Marine Ecology 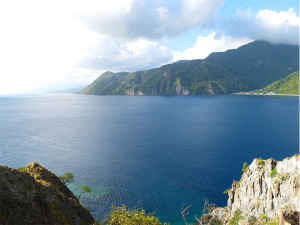 The Sperm Whale is typically an animal which lives far from shore in waters over 1000 m deep. However, the shape of the volcanic islands in the Caribbean and the deep ocean basin off the west coast of Dominica create the proper living conditions for Sperm Whales to inhabit waters that are easily within reach of a day trip.

Whales and Dolphins area found in the waters all around the island, however most tours are conducted on the Caribbean Sea where the water is calmer.

The Most Commonly Sighted Species of Whales and Dolphins

Arranged in order of sightings:

Other species seen in recent years include:

But you never know when you might spot one of the rare or endangered species that frequent the waters off Dominica! 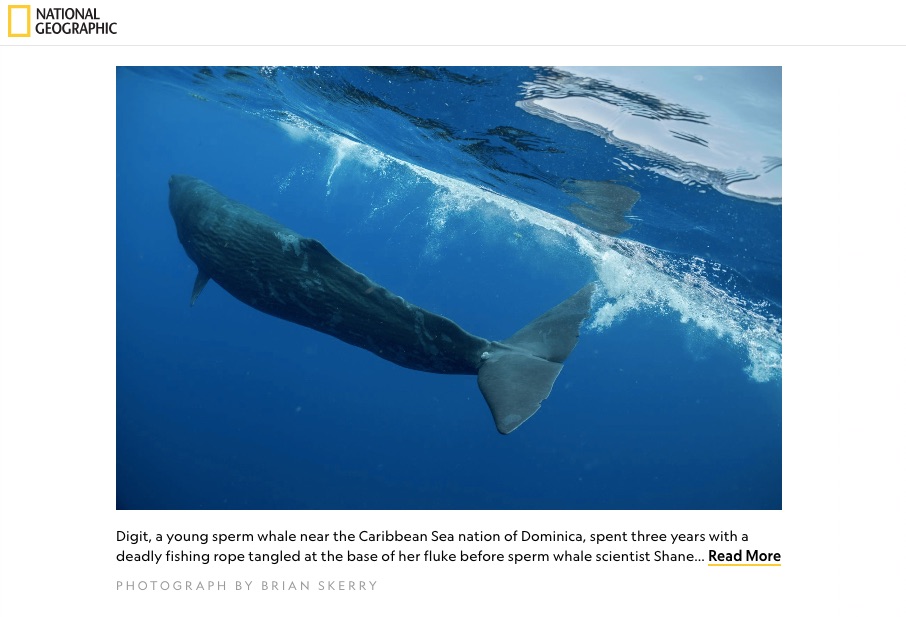 Whales and Dolphins watching off the coast of Dominica. Taken from Media Man 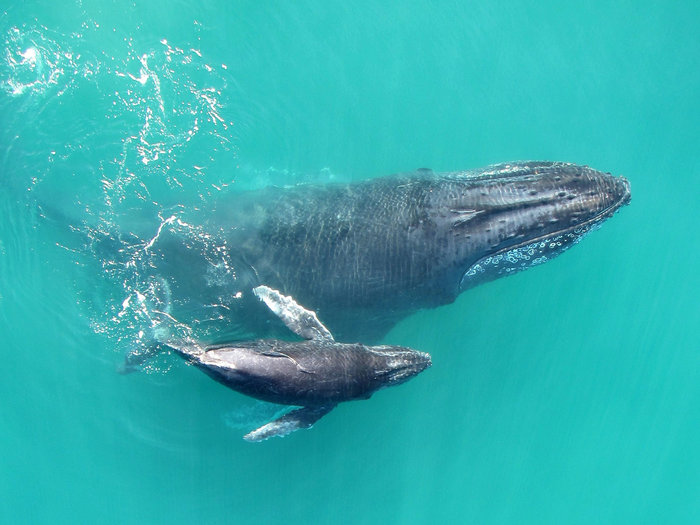 The Sperm Whale Vs the Humpback

The Sperm Whale, has a resident population off of Dominica made up of females and their young. The males migrate returning to mate in the Caribbean during breeding season (December – March).

Did you know?  Sperm whales and giant squid may be mortal enemies. Many stories of deadly battles between these two massive animals exist, and sperm whales have even been seen with suction cup-shaped wounds and remnants of giant squid in their stomachs.

The Humpback Whale, which migrates between feeding off North America in the summers and the Caribbean during breeding season (Feb-Apr) is found in Dominica from February through April.

A Guide to Whale Watching

Although there are resident whales, and sightings frequent throughout the year, the best time to go Whale Watching is during the mating season during the months of December – April.

(your Tour Operator or Hotel may provide some of these)

Seeing and being with these magnificent creatures can be a breathtaking experience, but there are still rules that should be followed so we don’t cause distress or even damage to our Whale and Dolphin friends. Tour Operators will inform you of rules and regulations.

Swimming with the Whales

Swimming with the whales is not permitted except under strictly enforced government permits. This requirement was put in place to protect the whales.

Solving Mysteries in the Sea

He is co-founder and head researcher of the ongoing Dominica Sperm Whale Project, which has operated under permit from the Government of Dominica’s Fisheries Division since 2005.

Gero has been following these mysterious mammals for thousands of hours to determine how the largest toothed whales in the world interact with each other through communication and socialization. He and his colleagues have made some amazing discoveries about their diet, genetics, relationships and sounds. His observational research methods are similar to scientists like Jane Goodall and the late Dian Fossey, who intensely studied primates in the field.

It’s the first time ever that marine biologists have been able to look at whales as individuals within families. “There is a whole society in the deep ocean that we are only starting now to understand,” says Gero.

Throughout the past seven years (2005 to 2011), he has closely monitored over 20 different sperm whale (family) units in Dominica’s waters. They each comprise about seven members who are closely related. Their family structure is matrilineal, as the females tend to stay together for life. The grandmothers, who can live to about 70 years of age, assist their daughters with the care and rearing of their grandchildren (both male and female).

While the females and juveniles travel only within tropical and subtropical waters, the mature males are much more nomadic. Once they reach about 15 years of age, they are socially ostracized by the females in their natal family unit. They then migrate to the waters near the South or North Poles, only to return to tropical waters to reproduce when they are about 30 years of age. Doing those 15 years away, it is known that they feed well and “bulk up,” discloses Gero, “but why they actually go North or South is still unknown.” When they return to warmer waters to breed, they do not necessarily return to where they were born and they are thought to even switch oceans in search of females.

Their organized social structure is enhanced by their unique ability to communicate with each other. “The world of the sperm whale is a world of sound,” says Gero. He further explains that “social noises,” called codas, are a series of rhythmic clicks that permit whale family members to talk to each other. Various regions of the world sound different because they use slightly different social sounds or dialects. Although they spend about 80 % of their lives below the surface, they can be found breathing and “socializing” on the surface the rest of the time.

Another fascinating function of sound originates from the animal’s massive ‘nose’. Therein is found the spermaceti organ, which contains an off-white waxy substance that enables the sperm whale to make loud noises in the form of clicks which according to Gero, “act like a sonar system” deep in the ocean. Thus, their primary food source, deep sea squid can be found by echolocation in the dark depths. These sounds are quite substantial (about 200 decibels – louder than a jet engine) and can be heard on a boat’s hydrophone (underwater microphone) from several kilometers away.

Deep waters off of Dominica’s west coast and apparent plentiful feeding grounds have enabled sperm whales to live in this area. The sperm whales in Dominica which Gero has been following are known to move around the Caribbean and use the waters between Guadeloupe and Grenada. A long and steep underwater basin in the Eastern Caribbean, which dips below 1,000 metres, makes an ideal habitat for these whales.

As these creatures are at the top of the food chain, their health status is a potential indicator of the condition of the rest of the marine eco-system. Very little is known about their main sustenance, deep sea squid. “It is difficult to study the diet of an animal that eats near the bottom of the ocean,” professes Gero.

At one time, it was estimated that there were just over one million sperm whales on the planet. Then whaling in the 18th and 19th centuries resulted from a demand for the spermaceti oil, which was primarily used as a lubricant. A resurgence of hunting between the 1950’s and 1980’s further reduced their numbers. Today, the IUCN Red List of Threatened Species has classified sperm whales as ‘Vulnerable’, as it is thought that only about 360,000 exist now. Gero confirms that this is about a third of what there once was!

Although their diminished numbers are largely protected since 1988 by the International Whaling Commission’s moratorium on whaling, there are still some known threats to their existence.

Numerous contaminants, such as chemicals and heavy metals are found in every ocean. Entanglements in fishing gear including long-line and deep sea gill nets are also potential hazards. But Gero stresses that noise pollution cannot be overlooked as another huge concern. Seismic surveys, naval sonars and engine noise from ships can alter their natural behaviour and have a serious impact on their well being.

“There is so much noise in the ocean now that for whales it is like living in a rock concert,” he insists, “ The social noises of some whale species have potentially been modified due to the changing sound environment around them. This could adversely affect their communication with each other. In the dark undersea world which depends on sound, noise makes life difficult!”

The public can more easily appreciate and understand the significance of these elusive wild animals by participating in a whale watch excursion. “Whale watching, when done respectfully from a safe distance, can develop an awareness of the whales and connect people to the ocean,” says Gero. Dominica provides enthusiasts with opportunities to observe sperm whales and other species on whale watch operators’ boats off of Dominica’s accessible west coast.

Some newly-discovered parallels between humans and whales demand consideration too. “Their habits say a lot. For example, the grandmas hold knowledge and pass it on to their daughters,” he reveals, “They demonstrate the significance of family relationships and that who you spend time with is important.”

Shane Gero is intent and enthusiastic about solving other sperm whale mysteries. “It’s a privilege to work in Dominica. It’s such a unique spot. I hope the Dominica Sperm Whale Project can continue for thirty years. We have learned so much in seven years. I can only imagine what can be accomplished in seven more!”

Gwenith M. Whitford, BMus, MLS is a freelance journalist who resides in the Commonwealth of Dominica, West Indies.
Email: gwenithwhitford@hotmail.com

Distribution: Worldwide – from the Arctic to Antarctica in waters greater than 1000m (3000ft) deep.

Behavior: Can reach depths over 2km (1.2 miles) and stay submerged for 45-60 minutes on average.

Searching For Whales With The DSWP 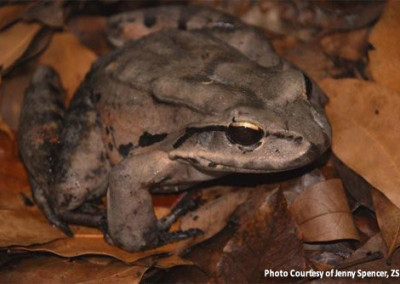 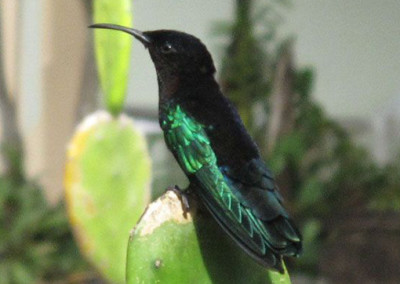 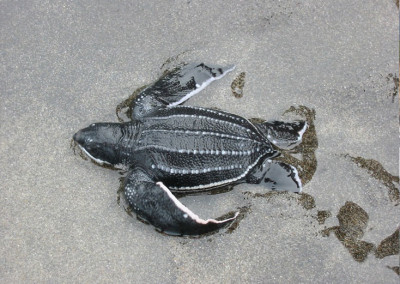 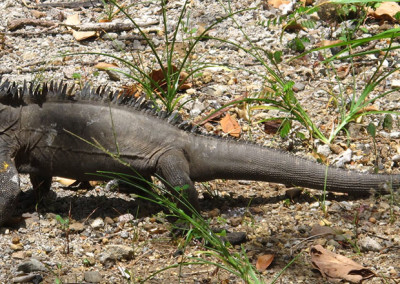 The Encyclopedia of Earth - Marine Ecology