Films like “Pirates of the Caribbean” & “Pirate Master” have perpetuated
Pirate legends and in some cases, created new ones. But what was a pirate’s
life really like? Were pirates the top sea-dogs, or were there others whom
even pirates feared? Read more below.

The Caribs named their island Waitukubuli, “Tall is her body.’ Read more about Dominica’s stunning beauty and our unique natural attractions to find out why. 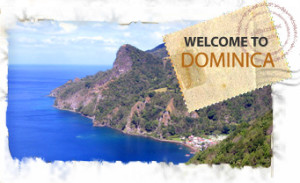 A Pirates life for me!

Dominica is one of the filming locations used in Pirates of the Caribbean 2 & 3: “Dead Man’s Chest” & “At World’s End” as well as Mark Burnett’s “Pirate Master!”

This is especially fitting since the island is not just the most unspoiled island in the eastern Caribbean, but in reality it was home to many pirates and their legendary treasure!

Films like “Pirates of the Caribbean” & “Pirate Master” have perpetuated these legends, and in the case of Pirate Master’s Captain Henry Steel, created new ones. But what was a pirate’s life really like? Were pirates the top sea-dogs, or were there others whom even pirates feared? Read on to find out…

The Caribs named their island Waitukubuli, “Tall is her body.’ Learn more about Dominica’s stunning beauty and our unique natural attractions to find out why.

Even Dominica has had it’s fair share of encounters with famous pirates and buccaneers! 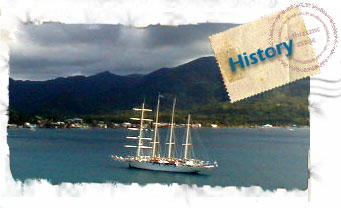 Dominica’s history has always been a turbulent one. Sighted and named by Columbus in 1493, he was not to know our indigenous people had travelled up the island chain many hundreds of years before him, naming this rugged island ‘Waitukubuli’: ‘Tall is her body’

And just as that rugged height was of reverence to the Kalinago, so it was an impediment to the colonical powers in their relentless march across the Caribbean. Though bickered over by the Spanish, French and English crowns from 1500 through to the Treaty of Versailles in 1763, when the British finally gained undisputed control over the island.

But throughout this turbulant period in history, the Kalinago were here; this archipelago was their home.

Sometimes they traded peacefully; sometimes they saw opportunities and took them stripping shipwrecks of treasure and oft times fighting and beating the invaders, whoever they were.

Amidst it all one story persists – that of the Kalinago Pirate Treasure…. 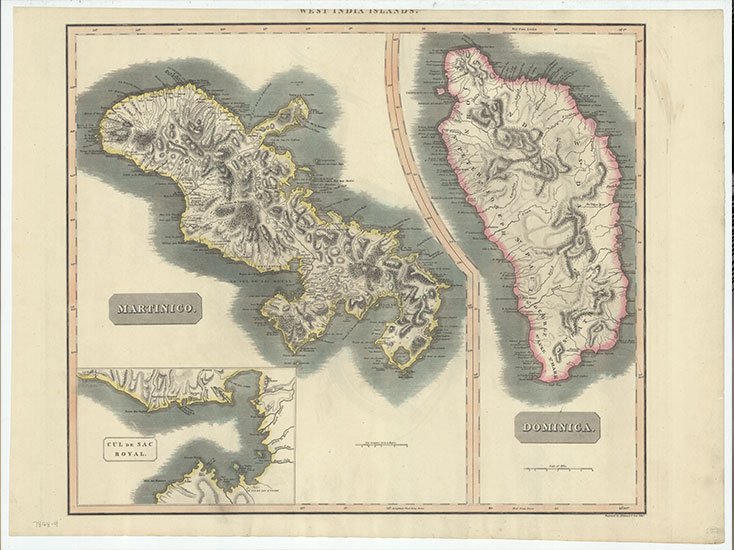 This map of Dominica and neighbouring island of Martinique was published by John Thomson & Co. in 1814.

Dominica is declared to be a stopping place for the outward-bound convoys of the Spanish treasure fleets entering the Caribbean from Europe.

The bay at what is now Portsmouth, “the bay on the northwest shore”, with its forests, hot springs and fresh water was the anchorage. The fleets would then split into two, one sailing to Cartaghena and the Isthmus of Panama the other to Mexico.

A small fleet of Spanish treasure ships on their way back to Spain is wrecked in a storm off Capuchin Point. The Kalinago strip the ships that are cast onto the shore.

French and English interlopers such as John Hawkins, Sir Francis Drake and the Duke of Cumberland begin to use the bay at what is now Portsmouth as a refreshment stop and for trading with the Kalinago for tobacco and food.

Dominica is a treasure beyond compare… 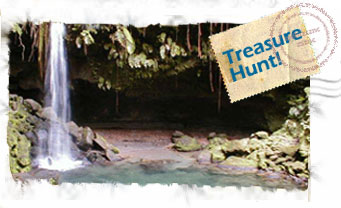 “In 1567 six vessels of a Spanish fleet were wrecked on the Northwest tip of the Island of Dominica. It is said that they carried over 3 million in pesos, and that the survivors were captured and eaten by the Kalinago Indians. During a salvage attempt a year later it was learned that the Kalinago had themselves salvaged the treasure and hid it in caves. They would not break and say where, even under threat of death. There are no records of the treasure ever being found.”

There are many secret hide-aways and hidden attractions in Dominica. Spend some time exploring the island and you will find a memorable, secluded spot all your own.

Where to Stay – find your treasured hide-away! 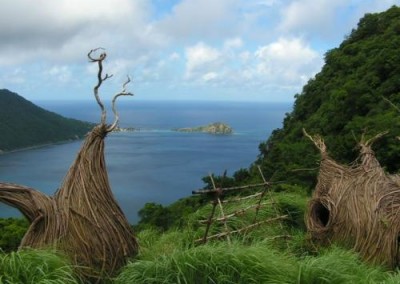 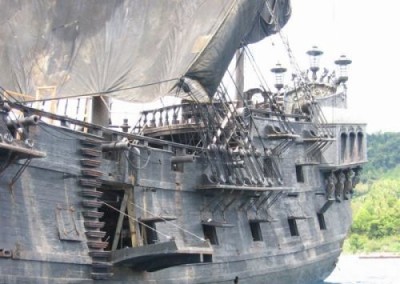 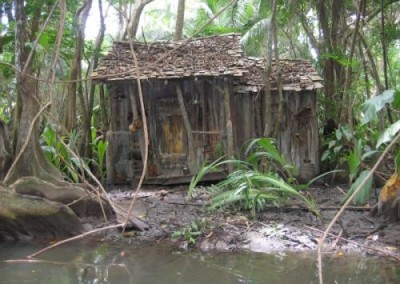 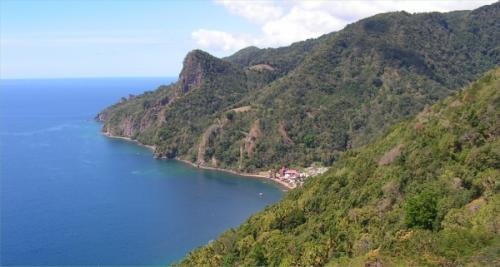 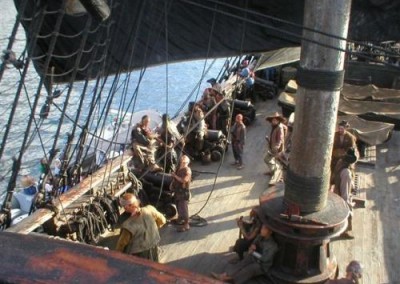 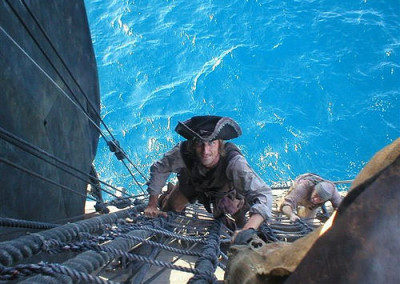 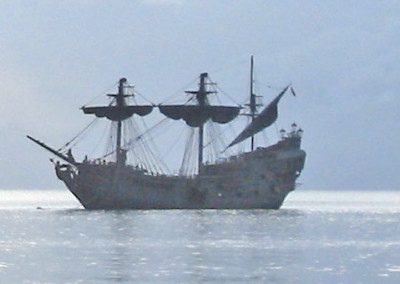 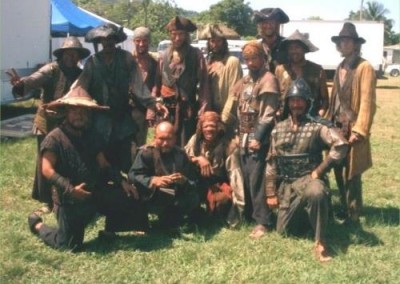 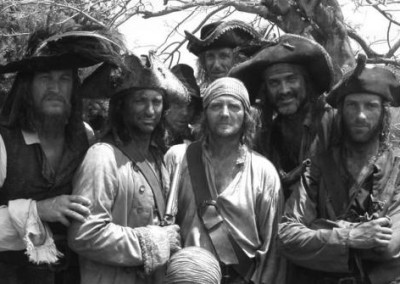 The film-makers for Pirates of the Caribbean 2 & 3 had their work cut out for them!

The sites selected for filming were spread throughout Dominica, from the rugged northern coast in the foothills of Morne Aux Diables, to the steep rocky cliffs of the southwestern coast between Point Michel and Soufriere.

Even Pirates have to take a little R&R from their hectic lifestyle!

Here is our selection of fun stuff for all ages.

Even Pirates have to take a little R&R from their hectic lifestyle! Here is our selection of fun stuff for all ages.
Pirate Games to Play Online or Download Pirate Activities for Kids

What is YOUR Pirate name? Enter your name & gender and Ye Be Named.

Here are some websites with fun activities & crafts for children, all about Pirates, PIrates, Pirates!

A to Z Kids Stuff for Pirates
Read a Pirate Story and illustrate it; create your own Pirate Flag; and lots more fun pirate activities.

DLTK’s Crafts for Kids: Pirate Activities
Pirate Colouring pages & crafts. Instructions for how to make a Pirate Ship out of small boxes.

Pirates of the Caribbean LEGOS!

Scense filmed in Dominica. Get the details about these Pirates of the Caribbean Lego sets…

In the 17th Century, Dominica was a great place to escape from the troubles of the World. Passed back and forth between the English and French through various treaties, the island pretty much minded its own business and carried on with life. Dominica became a haven for escaped enslaved labourers (called Maroons, or mawon in creole) and was actually declared a free island for 100 years.

Today, Dominica remains a beautiful, natural paradise. It is still a perfect escape from the troubled world.

So get away from it all and book a vacation at one of our precious Hide-Outs!

Where to Stay in Dominica 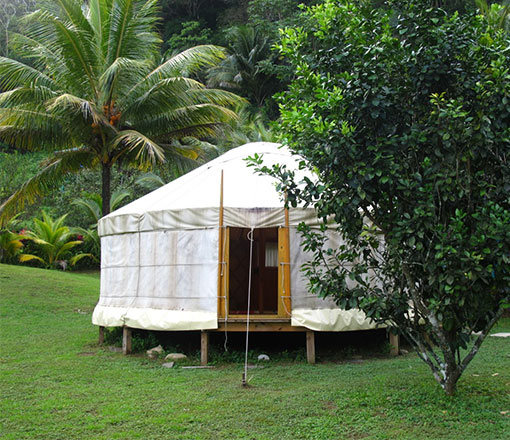 I doubt pirates would have wanted to take 14 days to walk from the foot of Dominica to the tip, but for the land lubbers out there, you have the perfect opportunity to do just that!

Dominica’s Waitukubuli National Trail is a 115-mile trek from one end of Dominica to the other. Experience Dominica from the inside-out on this wonderful trail.