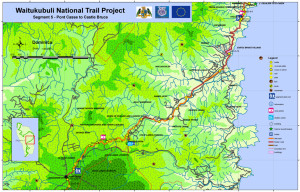 Leaving from Pont Casse (also known as the 'roundabout' at the center of the island), Segment 5 of the WNT skirts the Morne Trois Pitons National Park, which is an UNESCO World Heritage Site.

Heading east through rugged terrain where runaway slaves hid, you will arrive in Castle Bruce to the sounds of the Atlantic Ocean's waves crashing on the shoreline.