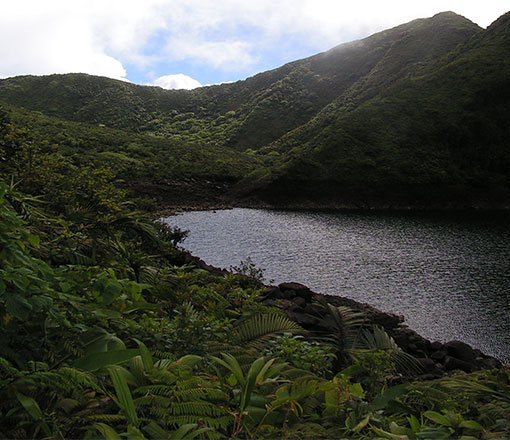 The Boeri Lake is the highest lake in Dominica at an altitude of 2,850 ft. (869 m) and as such is often shrowded in mist. Located on the slopes of Morne Micotrin in Morne Trois Pitons National Park, it can be reached by a trail a little over 1 mile (45 minutes walk) from the Freshwater Lake.

Lennox Honychurch writes: Boeri is a name of Carib origin given to the area which is now called Canefield and to the river which bears that name. The name first appears on the earliest British map of 1768 and is mentioned by the French even before then. The lake, being the main source of the river as it seeps underground, was called after the river.

The Boeri lake is another example of a crater lake. Almost circular in shape, it has a depth of at least 117 ft. and a surface area of approximately 4.5 acres. The level can vary dramatically according to the severity of the wet/dry season. It is at its highest between October and December, and the level has been known to drop by 25ft from the high water mark in the dry season.

The lake is known locally as 'Letan Bwewi', and the trail to the lake affords some spectacular views as far at the Atlantic coast and back towards the Freshwater Lake. The walk takes you through Montane forest, dominated by tree ferns and 'cabbage palm'.

The Lake features in several Kalinago myths and legends and is reputedly home to a Nessie-like monster!

Continue driving past the main Fresh Water Lake turn off to the end of the road. A sign clearly states the Trail head to Boeri Lake.