Known as "Wa Bio" in Dominica, 'moonshine' rum has been produced as long as anyone can remember. It is part of a cultural tradition, a fine art passed on from generation to generation. 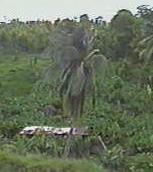 The still is often hidden deep within the bush

The Still is often hidden deep within the bush. Yeast, (brown) sugar, molasses and water are mixed in a large 45 gallon oil drum and allowed to ferment. This may take between 5 to 15 days, according to the amount of sugar. During fermentation, the process is monitored by both the smell and the taste of the bubbles given off by the fermentation process. As the process nears completion, the mixture begins to clear and a sediment forms towards the bottom. The clear liquid is then decanted into another drum.

This second drum is the one to which heat is applied, and out of which comes the bent ‘goose neck’ pipe which leads to the ‘running pipe’, which in turn leads to a coil immersed in a third drum filled with cold, stream water. It is in the coil that the vapour from the boiling water (the product of the fermentation) cools, and drips out into a container.

Three distinct ‘grades’ of rum will drip into this container. The purest is that which is taken out first, and as such the strongest. It is always mixed with the weaker rums. The next strongest rum is known as ‘Ti rum’ (‘little rum’), after which follows the weakest: ‘Ti toe’.

The surest way of gauging the strength of the final product is a version of the original meaning of ‘proof’ – by throwing a small amount of the rum into the fire. If it burns, its OK; if it ‘outs’ the fire, it’s not rum.

The three grades of rum will be mixed and bottled.

The finished product is used for domestic consumption, or sold in nearby villages. Occasionally, it may reach the capital. It is however very popular with Dominicans residing overseas and visiting their villages of birth; they frequently leave Dominica with several bottles. If sold on the local market, it costs about half the price of an official bottle ($4.50 as opposed to $9.00).

Part of its appeal is its purity: made with spring or mountain stream water and with no artificial ingredients, many people prefer this over the more mass-produced variety, which is thought to have harmful additives. A Cane Mill is often used to crush the raw sugar cane.

Consumption of course peaks at those times of the year like Christmas and Carnival. It is however a year-round process. Based on the figure of a half-bag of sugar producing about 30 bottles of the finished product, and one bag used every two weeks, we’re talking of one still producing well over 1,400 bottles a year. However, before one thinks of getting into the industry, profits are marginal: with a bag of sugar costing $90 and the whole process being labour-intensive, it’s more a labour of love.

It seems only a small number of areas are engaged in the making of moonshine; or rather, have a reputation for high quality. These areas are often in more remote parts of the island. Tradition also comes into play: the still I visited had been in operation for over 20 years, and was very much a family-run operation, with each adult member having a drum ‘on the go’.

And as for the taste of ‘Wa Bio’? Very, very smooth indeed!