One of Dominica’s national sports, cricket can be confusing to the novice. Here we explain the ins, outs, and the innings.

Dominica’s Windsor Park Stadium has been host to a number of first-class cricket matches including Test matches and West Indies vs India, on June 2011,  Check out upcoming games on our Events page.

Cricket is defined as “a bat and ball, team game played during the summer in the British Isles and in several countries influenced by the British, such as Australia, New Zealand, India, Pakistan, South Africa, and West Indian nations”.

Cricket is played between two teams of 11 players on a grassy field, in the center of which are two wickets – the equivalent of baseball’s ‘bases’. When a team is ‘in’, the other team attempts to get each of them ‘out’. Then the team that was ‘in’ is ‘all out’, and takes its place in the ‘out field’. The team that was in the out field in turn goes ‘in’ until they too are ‘all out’. This process (an innings) may be repeated once more (a match can last one day or take as many as five).

The team with the highest number of runs (points scored primarily by running between wickets after hitting the ball) wins the match, after which the players and spectators recover from the confusion over a beer in the pavilion, crickets equivalent of golf’s nineteenth hole. 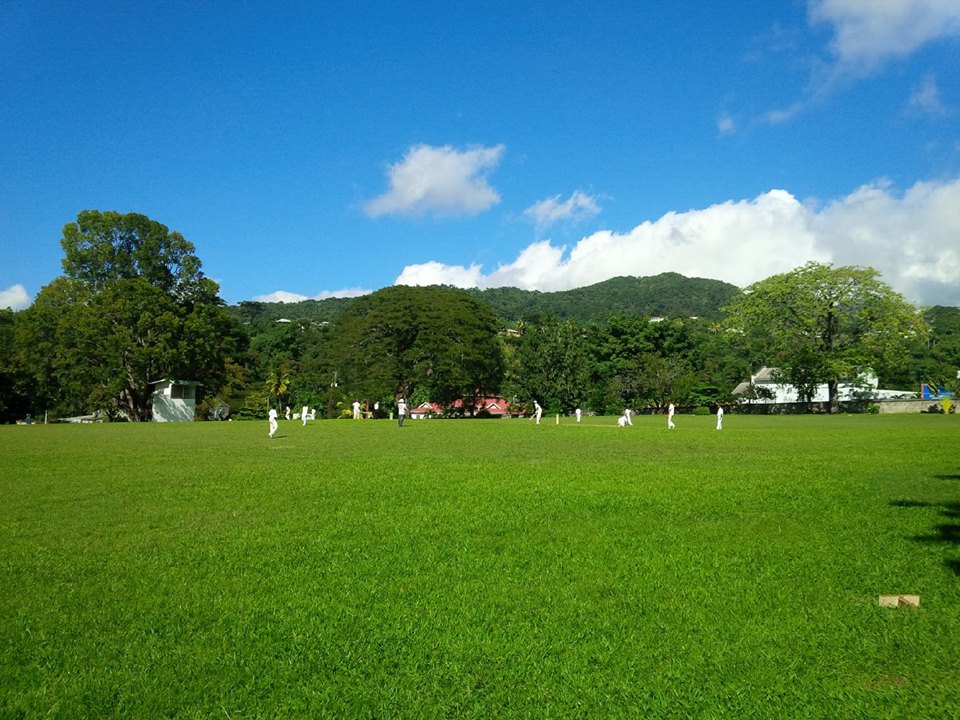 Cricket being played in the Roseau Botanical Gardens

Cricket afficionados will tell you that one subtle difference between their sport and baseball is that the ball can bounce before the batsman hits it. This bouncing is called a pitch, but the player bouncing it is not called a ‘pitcher’ like his baseball equivalent. He is the bowler, and must keep his arm straight when releasing the ball, which he aims at the batsman’s wicket (or base). The wicket consists of three upright wooden sticks so placed that that the ball cannot pass between them. Wooden bails lie in grooves on top of them. When hit by the ball the whole arrangement collapses, indicating the batsman is out. At this point the next team member comes in to bat.

The act of bouncing the ball on its way to the batsman allows the bowler to impart movement to the ball, with the intention of catching the batsman unaware. This movement, or spin, may cause the batsman to misjudge the flight of the ball, resulting him to mis-hit into the waiting hands of a player from the opposite team, or even to miss it all together. A collection of six balls (‘deliveries’) is called an over; one delivery in an over can be aimed at the batsman’s head. This may cause the watching public to mutter ‘that’s just not cricket’. Which, of course, it is.

According to the speed (pace) and movement of a ball, the batsman has various options. He may drive it along the ground, lift it into air, or flick it to the side or behind himself. Alternatively, he may use the safety pads on his legs (or arms) to stop or deflect the ball. This is risky because it will invariably prompt the bowler and his team to shout ‘Howwizzzahhtt!’. This means something like ‘How does that look to you Umpire – is he out?’ and is usually ignored by the umpire (referee) unless he judges that the ball would have continued on to hit the wicket. Then the batsman is given ‘out’ and the bowler’s teammates smugly feel that their banshee scream was justified. If the batsman is out without having scored a run, this is a duck and his embarrassment is compounded.

On the edge of the field is the boundary. If a batsman hits the ball to this boundary he is awarded four runs. If it does not bounce before doing so it is six runs (and stands a good chance of hitting a spectator).

The field itself is divided into two halves, the on side and the off side. ‘On’ is synonymous with Leg, and represents the side of the field to the left of the batsman as he faces the bowler or opposite wicket. Presuming of course he is righthanded; if not, everything I’ve just said is reversed.

Fielders are placed at strategic positions (in order to both stop runs and to catch a batsman out if possible) and these positions have distinct names. For example, the long off position is near the boundary, far away from the batsman to his front and right, while silly mid-on represents a position of extreme danger, as the name might suggest, being as it is immediately to a batsman’s left. A square leg says more about where one umpire stands rather than how he is standing, while backward point or deep fine leg says nothing about any mental or physical ability at all.

Indeed. It has been said that the amount you know about cricket is inversely proportional to a greater understanding of how to play. Worry not about the rules, teams or results but instead treat the whole experience as a strange and fascinating ceremonial ritual. 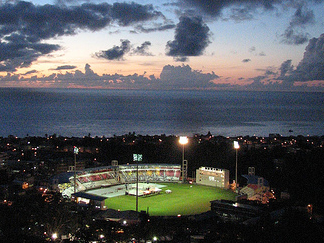 “in” Team – the batting team

Batsman – the person batting (his team is the ‘in’ team)

Pitch – ball being bounced towards the batter by the ‘bowler’

Pace – speed of the ball

Over – a collection of 6 balls (deliveries)

Boundary – edge of the field