According to Dr. Lennox Honychurch, Dominica’s Coat of Arms was designed in 1 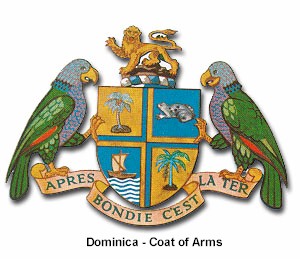 “on Seals, Shields, Banners, Flags or otherwise according to the Laws of Arms”.

The shield is divided into 4 parts and shows:

The Motto is Apres Bondie C’est La Ter and it means “after God, the earth” which shows the significance of soil and agriculture in Dominica.