Official Ceremony to Be Held at Windsor Park Sports Stadium

Roseau, Dominica – January 14, 2016 The opening parade and official ceremony for Mas Domnik 2016 is expected to be filled with fun, color and vibrancy. The event kicks off this Saturday, January 16th2016 from 3:00PM. Vice chairperson of the 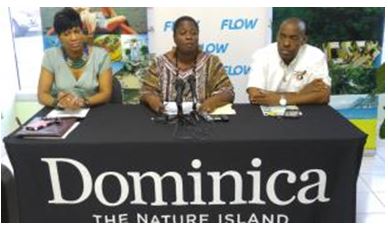 Carnival Road Parade Committee, Mrs. Charlene White-Christian, is pleading to spectators to remain on the sidewalks at all times, particularly during the parade of Bwa Bwa groups. This will not only aid in the prevention of safety mishaps but also promote the free flow of movement through the streets of Roseau. She strongly discourages the public from “cutting across streets or moving onto the [parade route] to take photos.”  Mrs. White-Christian also emphasized that there should be no “throwing of promotional items” from moving vehicles; instead designated persons should walk along the parade route to hand these items out.

A number of groups – advertising, traditional, community, pageantry and cheerleaders – have already registered for the upcoming parade. All groups wishing to participate are encouraged to contact Dominica Festival Committee (DFC) for 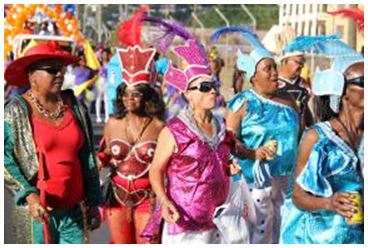 registration by Friday, January 15th for the latest. Those wishing to bring their own music system are advised to inform DFC ahead of time so the necessary preparations can be made. Groups are expected to assemble on Victoria Street outside of the Roseau Public Library from 1:30PM. The route for the annual parade, which begins at 3:00PM, will begin on Victoria Street, then onto Dame Eugenia Charles Boulevard followed by a right turn onto King George V Street, a left onto Great George Street, a right onto Kennedy Avenue, a left onto Bath Road, a right onto the Windsor Park Sports Stadium Link Road and finally culminating at the Windsor Park Sports Stadium for the opening ceremony. Advertising floats will not be allowed to enter the stadium. The official ceremony is a free and open event and all are invited to come and support Mas Domnik 2016 – The Real Mas.

To learn more about Dominica’s Carnival or to Join a Carnival Band visit avirtualDominica.com 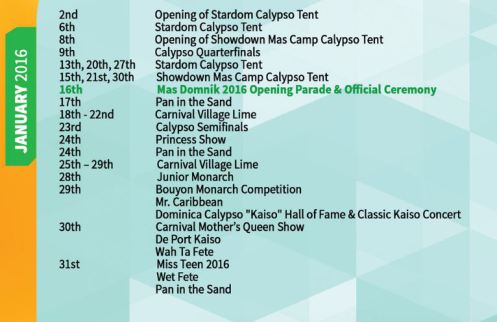